FORMATION OF THE US-RUSSIAN ALLIANCE

When those of the arctic pole are united together, in the East great terror and fear:
Elected again, the great trembling, Rhodes, Istanbul dyed with Barbarian blood.

The two united will not hold for long, and within the thirteen years are overcome by the Barbarian Satrap:
On both sides there will be such perdition, that one will bless the Barque and its leader.
March 19, 2021: Unfortunately, Cold War 2 between the United States and the Russian Federation will have to reach a climax that both countries will be able to move beyond first, and that won't happen until after October 2025. The danger posed to both countries by China and nations in Beijing's axis of blood will be one of the most important factors to bring Russian and American leaders together into a strategic military pact. Troubling conflicts involving Turkey, Iran, Greece, Saudi Arabia, Egypt, and Israel will also lead to the idea of a United Nations approved Russian-US global police force to keep the conflicts from spreading further since NATO will break apart into several smaller organizations. NATO will cease to exist due to two major wars, one between NATO members Turkey and Greece and the other between NATO members Albania and Macedonia.

Russia will already be involved in a protracted border conflict with China that began in 2025, one with periodic conventional missile attacks on each others cities, and the US will have already lost a major war with China in 2024 over Taiwan ...  one resulting in thousands of casualties on all sides (China, Taiwan, the US, Japan, Australia, and other allies), destruction of part of the US Naval Fleet, and possibly the loss of at least one West Coast city. Thus, the reason for this Northern Alliance against China.

IN a sense there will be something like a "half world war" in progress by February 2027 when the alliance is officially signed, although it is possible talks may begin a year earlier. Thus, future historians will either mark 2026 or 2027 as the start of the alliance.
​
Outmatched by the nuclear arsenals of Russia and the United States, China will back down on its threat to use them against Russian targets during the Sino-Russian War. Likewise, China will be hamstrung in its desire to incapacitate America any further with selective nuclear attacks on US cities. There will be several horrific battles involving US-Russian forces against Chinese forces over the next eight years, one memorable one resulting in hundreds of thousands of casualties occurring around Thanksgiving 2035. However, the main day-to-day battles will still be between Russia and China. By the 2030's they will mostly be sporadic air strikes, almost routine, similar to the Israeli strikes in Syria, severe attacks followed by pauses that might last for two or three weeks. There will also be a number of "proxy conflicts" as well.

China will plot with America's other enemies in secret, including Iran, Libya, and North Korea, to carry out what will appear to be a "terrorist" action. The result, in 2036, will be the destruction of Manhattan and another part of NYC.

China will share part of its nuclear arsenal with Iran and Iran's allies in Iraq and Libya and aid Tehran and Baghdad in developing their own nuclear weapons. To counteract this it will be necessary to arm Saudi Arabia and Turkey.

Ultimately, as evidenced by the destruction of Manhattan in 2036, both Russia and the United States will find themselves and their alliance slipping under the growing power of China and Iran and their allies. A renewed Turkestan that will stretch from Turkey to Tajikistan, Kazakhstan, Xinjiang and farther will become an even greater threat to the Russian Federation as it will ally with Beijing.

The alliance will be shaken as the "half world war" becomes WORLD WAR III. At that point nothing will stop the powers of the Orient, Persia, Babylon and Carthage. 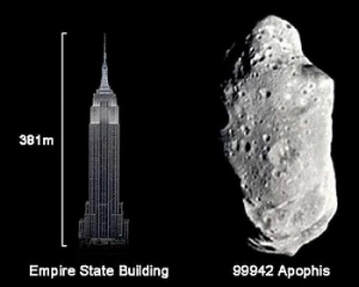 ​Other mutual causes for cooperation (near term):

If the asteroid’s path gets altered, it could end up on a direct collision course with the planet. One of the factors that could affect the asteroid is a gravitational keyhole. This is a specific area in space that’s heavily affected by the gravitational pull of a nearby planet. If 4953 (1990 MU) goes through a keyhole as it travels across space, it could get nudged into a path that will bring it straight to Earth. Astronomers may not know this has happened until it is too late.

Asteroid 99942 Apophis is due to make a very close approach to Earth on April 13, 2029, at 5:46 pm EDT. Larger than the Empire State Building, the keyhole problem mentioned above makes it a potential danger both in 2029 and on its next flyby in 2036. In 2029 it will be as close as the orbit of many of our satellites. A keyhole event would result in a catastrophe at that close a proximity. It is now believed that the asteroid that caused the Tunguska Event in 1906 might not have been much closer than Apophis will be when it sheared the Earth's upper atmosphere then sped off into space.

Combined strength of nuclear arsenals or laser weapons may be required to remove these threats to Planet Earth.

We can continue to give Elon Musk and NASA the time to bring the world closer to Mars. But if progress is lacking or there are setbacks, the late 2020's and 2030's could then see the opportunity for a US-Russian Mars base and two space stations used for inter-Mars travel, one in lunar orbit and the other in Mars orbit.

Creation of inner solar system launch stations, which would require less time to build than the supply, living and launch stations nearer to the Mars and lunar orbits, could cut flight time in half or by 2/3 if there are enough of them. In time, a network of stations and bases could be built along the flight path from Earth to the Moon to Mars and their terminals ... and eventually beyond. 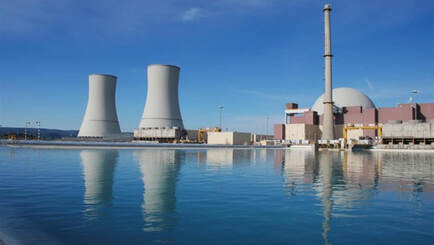 As the world moves deeper into various forms of green energy, an old mutual energy source both Russia and the US were expressing interest in since the 1970's will suddenly become a sound enterprise for mutual investment, development, job growth in both countries (and elsewhere), and global outreach under one Russian-US brand. This will be in the development and building of fusion power plants to replace the fission plants. Although wind power and production of electric cars will continue to be developed and implemented, disposing with fossil fuels, and new currently unknown sources discovered using AI technology, the fusion plants will be the main producer of home and business heat and electricity.
NEWS

The Biden administration will drop opposition to Nord Stream 2, a controversial gas pipeline that will help Russian president Vladimir Putin gain influence in Europe, the Wall Street Journal reports. The United States and Germany struck an agreement that will allow the completion of the pipeline, which will transport gas directly from Russia to Germany.

U.S. Secretary of State Antony Blinken and Russian Foreign Minister Sergey Lavrov met Wednesday for the first time since President Biden took office. The two top diplomats convened on the sidelines of the Arctic Council meetings in Reykjavik, Iceland, to set the stage for a future possible meeting between Biden and Russian President Vladimir Putin.

MOSCOW, May 12. /TASS/. Russian Foreign Minister and US Secretary of State Antony Blinken discussed the timeline of bilateral Russia-US contacts by phone Wednesday, including the proposed highest-level Russia-US summit, and agreed to hold a separate meeting during the Arctic Council ministerial session in Reykjavik.

May 15, 2021: Is it possible? Could the US-Russian Alliance begin five or six years sooner? Nostradamus actually mentions several such alliances, none of which have happened yet. One lasts for only three years and seven months and ends with the outbreak of a major war due to the actions of two small countries. It is possible these countries may be Hungary and Turkey. Another one lasts for thirteen years but finds both countries overpowered by a Barbarian Satrap (Persian leader, aka Iranian leader). Much later there is an alliance that lasts for eleven years and yet another that seems to be more or less permanent. Looks like a rocky road ahead.

The other vector I was going to choose was February 2022.
Powered by